The thing we often dislike about hairdryers is the noise they make when we use them. They produce the same effect on the eardrums as a street full of traffic.

You can do it whilst styling your hair it’s easy with a silent hairdryer ! 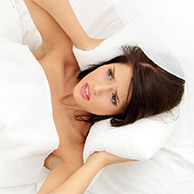 But what about power, as we tend to think that an efficient device is bound to generate more noise ?

n fact, it’s not the motor which is the main cause of producing decibels, but the circulation of air inside the device. Therefore, we can have a 1400 watt device which is noisier than a professional hair dryer equipped with maximum power, namely 2400 watts.

To offer you a quieter product, Rowenta has designed “Power Silence” technology. A combination of three mechanisms, this technology improves air circulation flow.

1 First of all there is the conical entrance of air which guides the flow very gently towards the propellers.

2 The propellers were designed to move the air around, limiting vibrations.

3 Finally, the Silence hairdryer is equipped with lateral openings at the rear. They allow air to flow and be dispersed outwards, thus making it less noisy than a direct blast.

This price is the price recommended by Krups to distributors
Compare